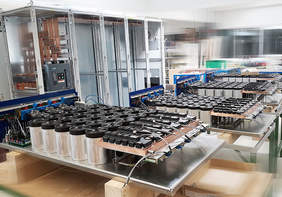 One example of Ibp’s success is the area of process controllers for welding applications. The company uses medium-frequency technology, which results in smaller transformers and a shorter connection to the machine. Welding inverters from Ibp are equipped with Mersen Energy Cap capacitors, which serve as buffers. They are charged by thyristors via the mains network. From DC voltage of about 600V the transformers are supplied with the output frequency of 1 KHz by means of an IGBT bridge

FTCAP film capacitors of the Energy Cap series have proven themselves in frequency converters, DC filters and DC links, for example. What makes them special is that they are available with terminals of different heights, for adaptation to the different levels of laminated busbars. This allows faster and easier mounting on laminated busbars. A clear advantage, because Mersen is increasingly focusing on perfect compatibility between laminated busbars and capacitors.