Concentrated power for harsh industrial environments: Robust power capacitors from FTCAP (part of the Mersen Group) feature impressive capacitances with support for high currents up to 850 A. 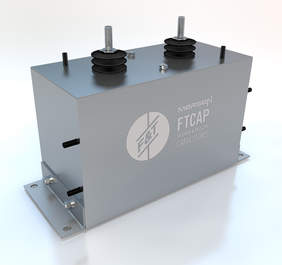 The capacitors of the Power Box series are equipped with a sturdy yet compact stainless steel aluminium housing that can withstand even strong vibrations – which is an advantage for example in railway technology. They also have self-sealing properties, so that they continue to function even after an internal short circuit – which is especially important for capacitors that are subjected to high loads. The well thought-out internal construction of the power capacitors results in a low equivalent series resistance (ESR).

In addition to a standard version, FTCAP also manufactures custom versions of the Power Box capacitors for specific customer applications. These versions are available with different connection variants and designs.